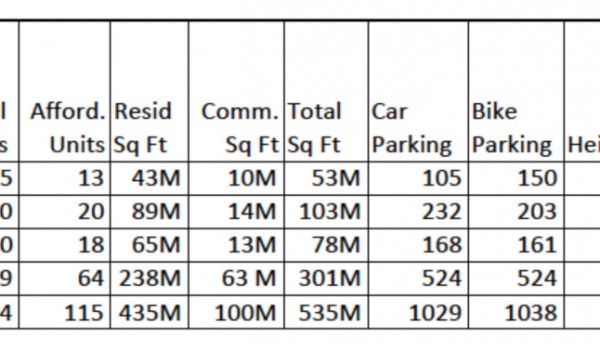 Our recently adopted City Zoning Ordinance envisions adding dense new housing in the downtown area. We can now see how well that housing goal is being met. What is undoubtedly true is that recent housing approvals have been massive. In the past nine months the Planning Commission has permitted four large downtown mixed-use projects:

To put these numbers into context, we can now answer some basic questions:

1) HOW BIG ARE THESE PROJECTS? The new area approved is equivalent to a second Santa Monica Place being added to our downtown. These additions will substantially change how our downtown is experienced, particularly in the southeast corner where two of the projects bracket the Lincoln-Colorado gateway.

2) HOW MUCH WILL THESE PROJECTS INCREASE OUR CITY”S POPULATION? If we assume an approximate population density of 1.7 people per unit (given the higher than typical bedroom count of these buildings), this represents about an 857-person increase, a 1 percent increase in the City’s current population of 94,000 and is actually a 25 percent increase in the downtown population. This is a steep increase – in less than a year, equal to 33 percent more than L.A. County’s annual average population increase over the last five years. Looking forward, the Southern California Association of Governments (SCAG) anticipates Santa Monica’s population to grow by about 453 people per year till 2040. By that standard we have just approved housing at about twice the projected annual growth rate.

3) HOW DO THESE PROJECTS FIT INTO THE DOWNTOWN COMMUNITY PLAN (DCP)? The DCP expects to add between 155 and 201 units downtown each year over the next 15 years. So in less than a year we have already approved three years worth of new housing.

4) HOW WILL THESE PROJECTS AFFECT TRAFFIC? Almost 3/4 of the residents who reside in our downtown commute via single occupancy cars each day. We hypothesize that this tendency is not likely to change soon for two simple reasons: the EXPO line does not provide true connectivity to all the workplaces of our new residents, and the high rents charged for these new units will be primarily only affordable to people who own cars and are inclined to use them. Automobile use will increase as more new residents crowd into downtown. This is an area already projected to have 24 of its 44 studied intersections operating at “fair” to “failure” level within the next 14 years (15 of them are already operating at “fair” to “failure” level). However the good news is that these projects have as many bicycle parking spaces as car parking spaces. So hopefully, increased bicycle use and the opening of the Metro will somewhat mitigate our future traffic woes.

5) HOW SUSTAINABLE ARE THESE BUILDINGS? These buildings will perform much better than comparable buildings built in the last decade because of stringent new energy codes. Particular attention has been given to water conservation, and some buildings will utilize the street run-off from the City’s stormwater recycling system for landscape irrigation. However, rainwater is only available on a sporadic basis. It is unfortunate that the new residential projects’ photovoltaic roof areas are so small in relation to their large power demands (elevators, lights, air-conditioning etc.) that they will generate less than 10 percent of their energy needs. They are also woefully unprepared for the expected surge in electric car recharging demand. Thus the new buildings are nowhere near the California stated goal of being “net-zero buildings” that generate as much power as they use.

6) HOW WILL THESE BUILDINGS AFFECT OUR PUBLIC SCHOOLS? Estimating school population is an inexact science. Currently the downtown population contains very few children. We may expect up to 15 percent of the new residents to be of school age (16 percent of Los Angeles County’s population is school age). With no local elementary school easily accessible within the downtown boundaries, many of these new students will have to be driven to school each day, thereby increasing traffic. According to the Downtown Environmental Impact Report the closest elementary school, Roosevelt, is at capacity, and is unprepared for any expansion.

7) HOW WILL THESE BUILDINGS HELP AFFORDABILITY? The good news is that about 23 percent of the units are affordably deed-restricted. SCAG would like Santa Monica to build 239 units per year till 2021. In fact, in only nine months, our City has approved two years worth of the SCAG housing targets. It should be noted that the 64 affordable units mandated for the 500 Broadway project are planned for a separate parcel on the eastern edge of the new downtown. These units are still in the approval process. Thus, they are not included in the area and parking data of the chart above.

Because of the desirability of Santa Monica, increasing the number of units will not reduce overall housing prices. The wealthy few will always outbid the middle class or poor for any available units that are not deed-restricted. This is not unusual when supply is limited (in our case by being a built-out, very densely populated city) and the demand is effectively infinite. Santa Monica is coveted by the wealthy of the world. We cannot satiate all the demand for beachside housing. Developers salivate at the possibilities of creating new market rate housing, hotels and offices in our town while throwing us a few bones of low cost housing. Yes, there is an affordability crisis in Santa Monica. But we must be clear – we cannot produce enough affordable units for a full spectrum of incomes in our city even if we saturate the city with multiple “Plaza’s At Santa Monica”.

8) IN SUMMARY: WHAT IS THE TAKE-HOME FROM THE LATEST ROUND OF DOWNTOWN APPROVALS?

A) By any rational metric, Santa Monica is exceeding its housing goals. If we were to approve no other housing for the next two or three years, we would still be meeting our fair share of regional housing.

B) Our City government must consider the burden that is shouldered as we provide more than our fair share of new housing in our built-out town. Our downtown is increasingly impacted and our mobility devices (streets, busses, bikes, light rail) have not yet proven to be able to absorb this growth without escalating gridlock. EXPO’s impact is still unknown: it will surely be beneficial over the coming decades but traffic jams in Santa Monica will not magically end on May 20. They may actually increase because of the train’s effect on intersections. The City’s water supplies are not growing as fast as the potential water demand. If our population grows at about 1 percent a year, yet we need to reduce our water consumption 8 percent a year to reach self-sufficiency by 2020, then this growth does not help our water sustainability targets. Likewise, schools and open spaces are not ready for this increased burden. In short, this much growth, if continued, is unsustainable and should be slowed down to allow our infrastructure (in the broadest sense), parks and schools to catch up. All the costs of this growth are eventually borne directly or indirectly by the city’s taxpayers and by the environment we all live in.

In conclusion, there is no housing production shortage in Santa Monica. There are those who are using the myth of an alleged housing shortage as a Trojan horse. They expect to cram an unsustainable amount of building into our town to increase their profits at public expense. These developers and their supporters expect our residents to meekly bear the burden of this ruanaway unsustainable growth. They want us to ignore the sustainability and livability impacts of that burden.